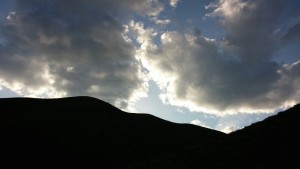 I did not intend to go to Ketchum. I head north instead, illusions of outrunning the weather. I’d spent long hours at his house in Key West, drawn what I could.

And then a small sign, white on green, at an intersection north of Pocatello. Simply “Ketchum”. 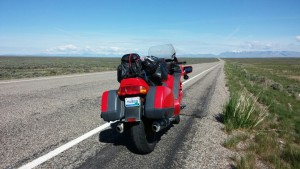 “How far?” I ask the clerk at a party store.

Way too far I tell myself, pulling on my helmet. The weather.

Idaho opens out when I head west, scrub plains at first, then mountains on the horizon. Within hours an ancient lava field, so massive I learn, that it forced an entire river underground, to surface fifty miles to the south. 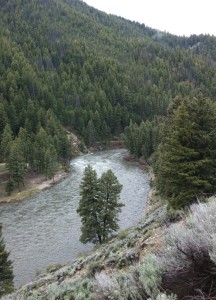 I reach Ketchum in time for a late-afternoon light show in the hills east of town. I pay no pilgrimage to Hemingway’s home or grave. It’s the writing, not the writer I tell myself, but linger near a river he fished.

And later, over linguine and a local amber, I imagine how desperately he fought and suffered at the end, stripped of the narrow vestiges he considered manly, entirely abandoned by his words.

View all posts by John Otterbacher →

Some stories don’t need to get their hair coifed or their teeth whitened before going out in public.
Buy the Books

Days in a life, hunches about living and excerpts from writing
Read the Blog